Ian has allowed me to write up the last few turns, as the game swiftly turned into a Confederate victory! Any set of ACW rules worth it's salt must surely favour the static defence in a firefight - and in this case the Federals (under time pressure to gain ground) were expending command points on movement and recovery while the Rebs tactical order sheets simply read 'load - fire - load - fire' with results familiar to wargamers everywhere !

The 12th Georgia had been forced back to the base of Sitlingtons Hill, but despite losing 4 stands out of their original 14 and spending most of the battle either disordered or with wavering morale - they didn't break ! Over their heads the 25th and 44th Virginia blazed away at the enemy without let up.

But then, over on the Staunton Turnpike, the cracks began to appear in Milroy's brigade. Rebel skirmishers worked their way up the wooded slope on the Union left flank and took out the undefended two gun section of the 12th Ohio artillery. These had been the only guns in action, and despite minimal strength had taken their toll on the Confederate line.

The Yankee 3rd West Virginia, positioned astride the turnpike below the guns, had been trading volleys with the veteran Rebel 31st Virginia since the engagement began. Ian sensed they were about to give up the ghost and diverted the 32nd Ohio, his only uncommitted regiment, to go to their rescue - but it was too late.


On the opposite side of the battlefield the 75th Ohio had been edging forward hoping to turn the Confederate flank, but as they closed the distance the withering fire from the hilltop sent them skedaddling as well.

Our standard victory conditions kicked in at this point. Coupled with overall losses, the two broken Union regiments gave the Confederates a VP total of 11 while the Yankees could only muster 5. Game over in conclusive style!

Each game turn is ten minutes of real time and is subdivided into six phases. Command points based on the quality of each regiment's colonel are then calculated and used to purchase actions which can be inserted into the phase grid as required. Players declare their actions phase by phase - fire too early in a turn and your target may not be close enough yet! Stop to restore order and the enemy may get in an additional volley. Absorbing levels of micro-management make these games great fun to play, although visually they may not be particularly dramatic! And still no bayonet charge ! 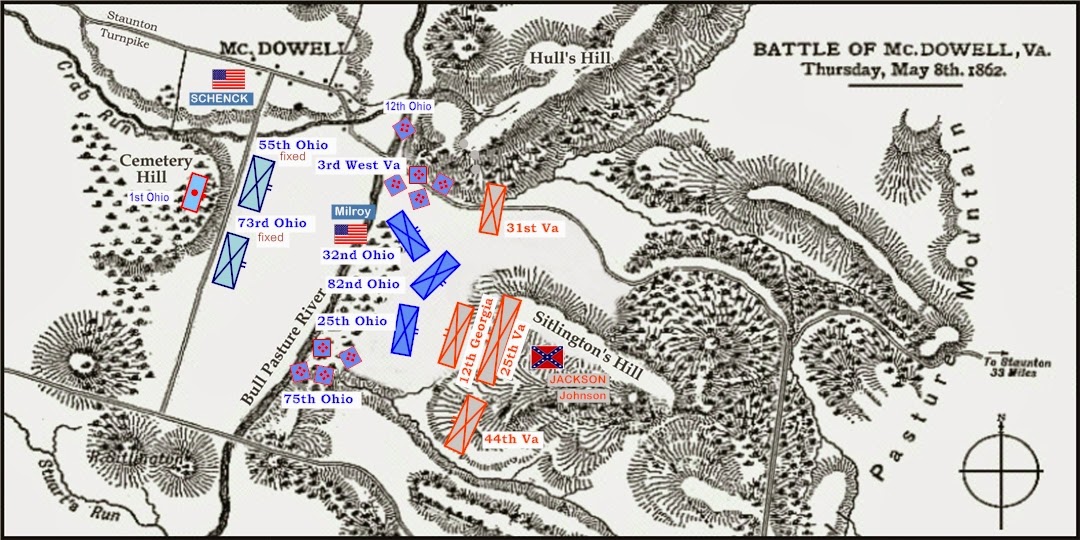